After several years of exile in Great Britain from where he piloted the position and commitments of Free France, General de Gaulle set foot on the ground of France by disembarking from La Combattante on June 14th, 1944, 8 days after the beginning of landing operations in Normandy. He left Courseulles-sur-Mer directly to give a first speech at Bayeux. The French thus discovered its imposing silhouette for the very first time. Then he left Bayeux to visit Isigny-sur-Mer, a city with which he wove a deep bond of friendship and pronounced to the affected population:

I am very happy to see the dear and bruised population of our town of Isigny gathered here, I know what suffered Isigny.
It is the sufferings that each parcel of France will have to pass before reaching liberation. But I know, like you, that this test will not be useless. It is because of this ordeal that we will make the unity and the greatness of France. I want you, with me, to have a feeling of hope in your heart, and to sing the Marseillaise

A few weeks after this first speech and this first visit in a territory marked by the chaos of the war, Charles de Gaulle returns. He was then mourned by so many destructions and the loss of so many of his fellow citizens. He expressed the need to return to these places, close to the civilians and their lavishness. Later, upset by an ever more overwhelming reception, the General De Gaulle wrote in his memories:

Isigny cruelly destroyed, and from which corpses are still drawn from underneath the ruins, does me the honors of its ruins.
In front of the war memorial, which the bombs have mutilated, I address the inhabitants. With one heart we elevate our faith and our hope above the smoking debris.

General De Gaulle passed away however his voice and his person still reason in the streets of the town of Isigny-sur-Mer. 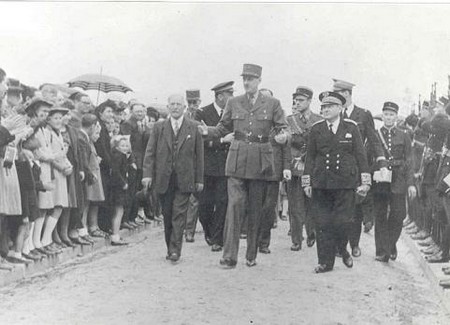 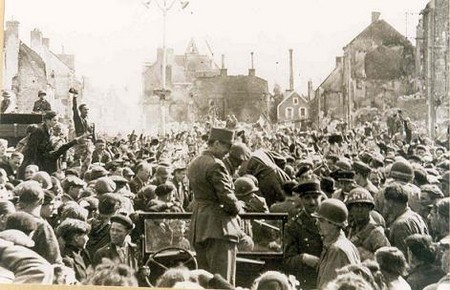